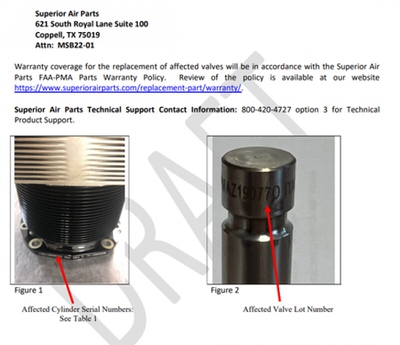 “We have found three instances where the valves have failed in service,” stated Bill Ross, VP of Product Support for Superior Air Parts. “Our overriding priority is always the safety of our customers and their aircraft. Therefore, after the required inspection, should an owner find that their aircraft has the affected intake valves installed, the aircraft is to be immediately grounded until the impacted cylinders can be replaced.”

Ross stated that the affected intake valves have Superior Part Number SA539988 and were shipped between January 20, 2020, and February 23, 2022. The intake valves were used in both new Superior Millennium Cylinders and rebuilt/overhauled cylinders using Superior intake valves used on Continental 470-, 520-, and 550-series cylinders.

Ross also stressed that because the intake valves were used by third-party cylinder overhaul/repair facilities, it is extremely critical that owners whose aircraft use rebuilt/overhauled cylinders using the Superior intake valves contact that shop to confirm whether or not the affected parts may have been used in their engines.

For more information and to download a copy of MSB22-01, visit: https://www.superiorairparts.com/downloads/servicebulletins/MSB22-01-Draft.pdf